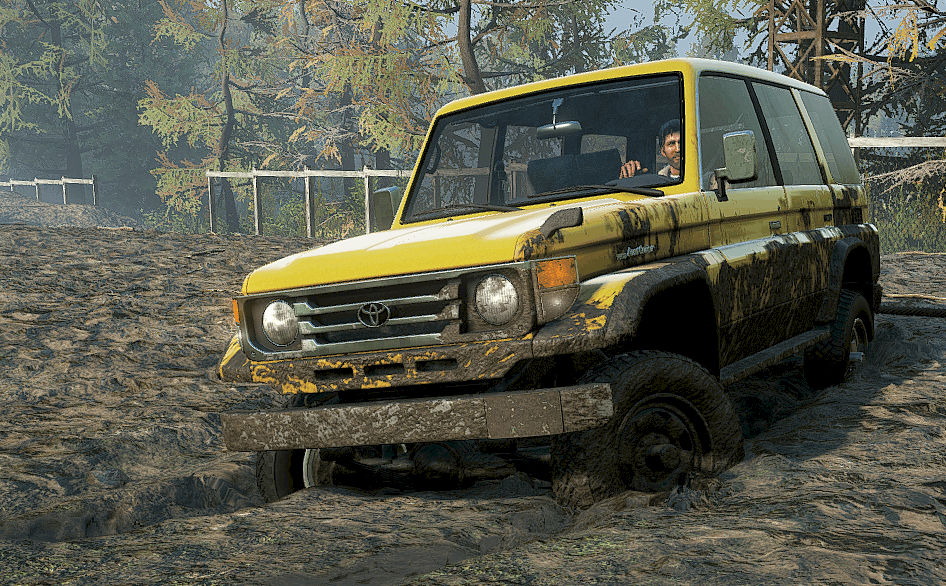 1.2 Fixed the quick winch at the front – now it works correctly. Improved camera zoom when the wheel is on the hood. Suspension adjustment. Updated engine sound. Fixed signal latency … Wide tires are another option with a narrower fit. Translation of the description of the car into 3 languages. Large wheels are no longer fitted to the standard suspension. Added a soft-start off-road gearbox, but will now go slower in lower gears.

Fixed quick winch in front – now works correctly. Improved camera zoom when the wheel is on the hood. Suspension adjustment. Updated engine sound. Fixed signal delay … Wide tires options with narrower fit. Translation of the description of the car into 3 languages. Large wheels are now removed from the standard suspension. Added an off-road gearbox with a smooth start, but will now go slower in lower gears.

1984 saw the debut of a new generation of Toyota’s legendary SUVs, the Land Cruiser. The car received the index “70”. In fact, the Toyota Land Cruiser 70 is the result of a restyling of the previous generation of the model, the updates concern only the design. The updated Land Cruiser was offered to buyers in two body styles: 3- or 5-door. There were also pickups and utility vans. Due to its high reliability and simplicity in operation, the Toyota Land Cruiser 70 enjoyed wide popularity, both among individuals and among various organizations. The significant advantages of the Land Cruiser 70, along with competitors in the class, are high cross-country ability in off-road conditions, comfort, safety, reliability and reliability in operation.

The SUV has a fairly spacious luggage compartment, the volume of which is about 800 liters. This will allow you to transport oversized cargo without unnecessary problems, which is very important for a model of this class. Toyota Land Cruiser 70 was equipped with gasoline and diesel power units with a volume of 3.4 liters, 4.0 liters, 4.2 liters. The model was aggregated with a 4-speed “automatic”. In 1988, a new generation of SUVs took over. Transmission – mechanical or automatic, depending on the modification.

Cars for the domestic market were equipped with diesel engines with a volume of 3.4 to 4.2 liters. The base was an atmospheric diesel engine 3B with a power of 98 hp, inherited from the 60th series. The turbocharged 13B-T was more powerful, producing 120 hp, and was limited to a limited number of modifications.

Since 1990, the 1PZ (3.5 liters) and 1HZ (4.2 liters) engines began to be installed on the Land Cruiser. In 1990, a spring suspension of the front axle appeared, which made the car more comfortable. For the Japanese domestic market, the production of the car was discontinued in 2004. It is still produced for export, equipped with a mechanical transmission, a winch and a snorkel.