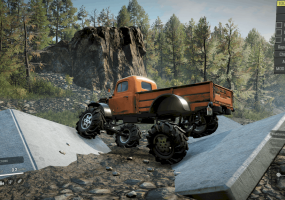 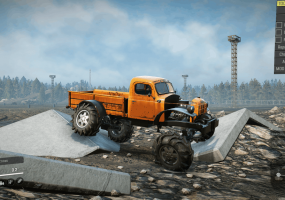 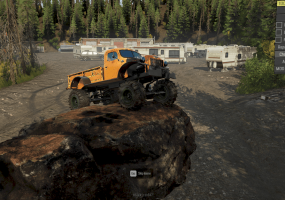 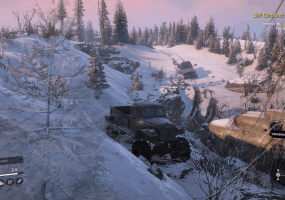 model from hum3d with little modification by me(admittedly i only gave this model the few things i felt it was missing i.e. better axles and leafs, firewalls so you didnt see through all the normals with the hood off,steering box and drag link and a couple other small touches, other than that its almost as the model came its just to good to cut up in my opinion)axles and leafs were off another model and all the blackouts drag link and steering box were done by me. tire meshes are as follows freshbuckshot is a modified version of offroad_tire_301 by pablo perez (2009) and the bogger mesh was done by me.

things still to come.
1. a better interior(just little things probably not working gauges yet, but door handles and a shifter at the bare minimum

2.more addons. there isnt much now but i do plan on making a full rack for the bed with supplies on it, probably a rollbar and possibly a bumper addon but idk i like the defualt one alot and i didnt make it removable either

3.working mirrors? ehhh idk same as the rest it doesnt bother me as much as it should so they are never high priority

Many thanks to everyone who has helped me along the way.(you all should know who you are by now, and the list is indeed getting longer)and that includes all of you who have left constructive criticism to help and shape these things i put together into the little “masterpieces”(they are to me.) they all should be. thank you

will this come to console? tbh probably not. i left the badges on and i dont currently have plans to make a second version for console. maybe if the demand is high enough. but idk. the files are there but it is not eligible from what i can tell and i didnt consider it when making it.

as with all my mods do not under any circumstances take and re-upload anything I’ve put together or created without my permission. (if you want to use a mesh I’ve created all you have to do is ask most of the time,and a nod to me wherever you use it, is all i ever ask in return) as far as uploading tweaks of my mods if you keep them private, then hey who cares. but I don’t want tweaks published publicly, (if you want to make mods, than learn to make mods.and make it yourself there’s a lot of time and effort involved in putting these things together and im just not cool with it, all the models I’ve used are easily publicly available, and the ones I’ve made, some have way to many hours for what they are into them.now if you wanted to work together and publish them on the same page with the credit to each accordingly? well that’s a different story,and that can be talked about)